Counter-current vs. co-current Flow for refrigerants with glide

A co-current condenser with a glide refrigerant will instead have an impaired temperature profile, as described in Figure 7.18. The decreasing refrigerant and increasing water temperatures will converge at the condenser outlet, resulting in very poor heat transfer. To avoid the need for an "infinite" heat exchanger with a very high number of plates, the temperature difference between the refrigerant and secondary fluid sides must be increased.

The sub-cooling must also be kept low for a co-current condenser, because the converging temperatures greatly reduce the already low heat transfer coefficient. More sub-cooling requires a very large heat transfer area, leaving a smaller surface available for the condensation of the gas. Thus, the condensation pressure and temperature increase, and the system performance (COP) decreases.

The favorable temperature program of a true counter-current condenser counteracts this negative effect in a way that is impossible for cross-flow heat exchangers such as Shell and Tubes (S&T). In an S&T heat exchanger with the refrigerant on the outside of the tubes, the most volatile refrigerant may even accumulate and cause problems similar to inert gas, with low general heat transfer and high system pressure. This is generally not a problem in plate heat exchangers, because all refrigerant is forced through by the channel geometry. 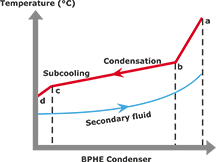 Figure 7.16 Temperature profile in counter-current condenser with glide refrigerant. Because the condensing temperature decreases, the risk of temperature pinching is avoided. 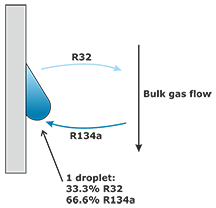 Figure 7.19 Accumulation of non-condensing volatile refrigerant. The formation of the first condensate droplet in a mixture of 50% R32 and 50% R134a (by mass). The mass transfer is perpendicular to the bulk gas flow in the figure.